Home » Los Angeles » SusieCakes - While We're on the Subject of Cupcakes, Why I'll Never Show Up Empty-Handed 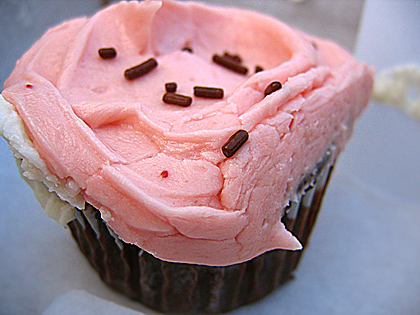 It’s no secret that I have a love-hate-hate-love-hate-hate relationship with cupcakes, but at this point, it’s mostly just hate.

I won’t get into the nitty gritty details about why I hate cupcakes. I don’t feel like defending myself against legions of buttercream superheroes armed with semi-automatic pastry bags, and because I am not so good at crafting solid, logical arguments, my head will end up impaled on a perfect peak of meringue frosting. However, I am better with exposition (rather than argumentation), so I will tell a story, even if the story only very tenuously has to do with cupcake and hate.

There was a point in my life when I had a fascination with that which we call “cupcakes” – the singular “that which,” and not plural “those which,” because I am talking about cupcakes as a concept (singular).

Fascination may not be the right word. Perhaps it is more accurate to call it curiosity driven by envy. At least, that’s what it is – curious envy – when it starts in kindergarten.

Cupcakes were the unattainable object of my elementary school desire. Later, and now, cupcakes have become an abstract concept, not a real memory, of love and celebration during childhood. I see cupcakes as nothing more than a smaller, drier, denser version of a cake with the added nuisance of crimped paper wrapping.

It seems that I might be, no, that I am, the only one for whom that sentiment is true, though. Most other (non-immigrant) American people enjoy and appreciate cupcakes because they derive a powerfully nostalgic pleasure out of eating something that very clearly reminds them of story time, naps, and four square. I would never take that away from anyone. Pride, love and maybe victory, I would take from someone, but childhood nostalgia, not from anyone. 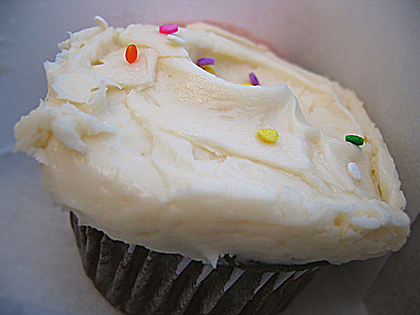 That is why when there is an occasion, I will bring cupcakes.

Even though they were not dead to me, they were never alive to me. Even if I didn’t bake them. Even if they're priced like professionals but presented like first year home economics. Even if the miserly seven sprinkles can't cover up the cotton candy pink frosting that gets slightly squashed during transport because they don't come in a box with cupcake holes. Even if the cupcakes from SusieCakes taste like sawdust sifted with sand.

Even though I never got cupcakes brought to me when I was a little kid. Even though they don't remind me of anything except feeling slightly jealous, I will bring cupcakes because...you should have seen the look on his little face when he saw what was inside the box.

Who Else is on the Subject of SusieCakes: