If I mix together sangria two hours before a party in order to chill it, but end up drinking three glasses before the gorgeous glass pitcher ever makes it into the refrigerator, does that make me an alcoholic?

No. No. Yes. And it also makes it very hard to fry potatoes. 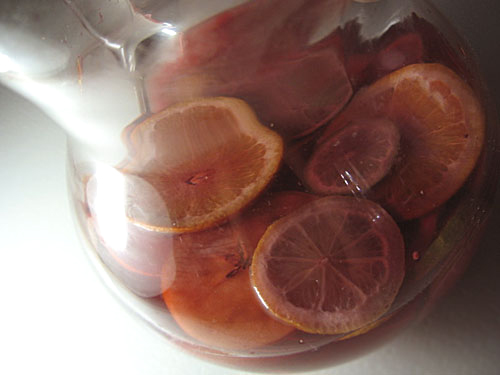 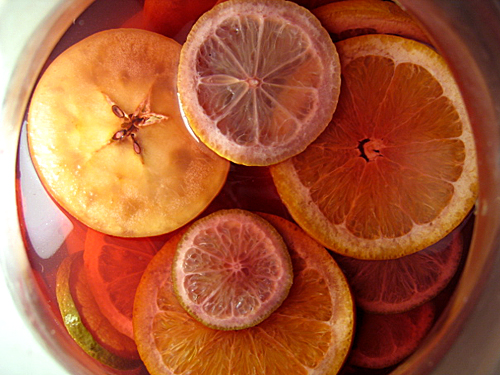 Sangria for the Naughty Hostess

If you think far ahead enough, chill all of the liquids before mixing together the sangria, even the red wine. Pipe down, wine freak, you're going to be mixing it with orange juice and soda for God's sake, so it's probably better to get through the shock now.

Pour 2 bottles of red wine into a large glass pitcher. The glass will let the sexy slices of citrus shine through. Add 1 cup brandy, 1 cup Triple Sec, ½ cup fresh squeezed orange juice, ½ cup sugar, and juice from half a lime. If you're afraid that stirring too hard to dissolve the sugar will break the glass pitcher, then dissolve the sugar in some of the orange juice first.

Top everything in the pitcher off with 2 cups club soda. My friend Steve told me that the secret ingredient (which isn't so secret anymore - ha!) in his lady-love-winning sangria is Fanta orange soda. Fanta! Makes me want to put my hair in a bouffant and wear Austin Powers-like '60s sex-kitten hot pants and go-go boots. Fanta-bulous!

Add thin slices of 1 orange, 1 lemon, 1 lime, and 1 apple. Some people cut the fruit into small dices, but I prefer the round slices because they look pretty and they stay in the pitcher. I like to drink my sangria without the fruit in my glass, although there are plenty of people who like to bite into those alcohol-soaked apples.

Chill the sangria for a few hours in the refrigerator. Do not add ice. Ice will water it down, and I don't know anything worse than a watered-down sangria.