Sunday. Do you remember Sunday? Only yesterday.

“Only.” The word, heavy, slow, so many different meanings, makes me sigh.

Only one day, but somehow Sunday feels like forever ago.

Sunday was a gorgeous day. Bright. Sunny. It doesn’t say much to call it a gorgeous day though, since this is southern California. It’s gorgeous every day, which is why it’s hard to remember it. When there are no events, distinguishing features, all the days are the same. When every day is the same, they all run together. It’s hard to keep track of time.

Really, from any other day, Sunday was no different.

Except that it was.

Anywhere else, sunshine is deceptive. You sense the sun in the bright blue sky through the window, only to step outside into the dead of winter. Sunshine in southern California, though, is true year-round to a 72 degree temperature. Sunshine always means warmth. Sometimes it means heat. Sometimes, so much heat, it burns.

No, the sun is not deceptive in southern California, but in Orange County on Sunday, the sun betrayed in a different way.

When I woke up Sunday morning, it was still so dark that we thought it was the middle of the night. It was so dark, I thought maybe it was still…yesterday. Had time stopped? Even just slowed down? No, it was already…today, autumn-dark at 6 AM, right on schedule, right on the never slowing, never ceasing seasonal non-stopwatch that ticks and turns in a universal vacuum. As I made my way meticulously around the apartment in the pre-dawn darkness, I did things that contradicted one another. I straightened up some papers on “my desk,” but pulled a few things out of the fridge so I wouldn’t forget them later. I was disoriented, even in a place in which I had spent so much time. Maybe the three fitful hours of sleep hadn’t been enough. Maybe I was having trouble accepting the reality of change.

I sighed, asked out loud if the change truly was inevitable in a whisper that no one heard.

As total darkness through the window started to dissolve into that eerie glow just before sunrise, I slipped back into bed for what I knew would be a last moment of bliss. Never before had I been so sensitive to the passage of time. I closed my eyes, unrealistically hopeful that maybe, time would stop.

Time didn’t stop. As I always say, you can’t fight time. You can fight Morris Day and The Time, but you can’t fight time. I woke up again for the second time on Sunday morning, not to the early darkness, but to a 9 am brightness that had pierced through the tiny cracks in the blinds. I let out a sigh that probably sounded like a breathy “fuck.” Today is – inevitably – today. Yesterday, last night, had already happened, and never before had 9th grade English been so applicable. The tense of “–ed” is past. Past. Passed. Whatever has passed never comes back.

When we surrendered to fully opening the blinds, the beauty of the day was overwhelming; I knew it was warm outside. If you were only watching, like I was, the branches sway against an impossibly blue sky through the window, even catching a glimpse of the kids running by in shorts down below on the perfectly paved street, you’d never guess – I looked at my calendar and was startled by the realization – that it was...already...almost…October.

How had it already become AlmostOctober? September is hanging on by a thread. What happened to August? July for that matter?

Summer had escaped and I hadn’t even noticed.

Autumn had crept in and I hadn't even noticed.

Signs of fall, as they always are every season, every year, for eternity, are there. For everyone else. Temperatures drop. Colors change. Individually, the physical indicators may be imperceptible, but taken together by all five senses, the impact is undeniable. In southern California, we don't have that full array of changes. There is only a decrease in the daylight hours, hardly a physical change, and day to day, hardly noticeable.

The southern California sun had deceived me. Shining so bright, the sun had blinded me to school busses on the street, candy aisles dressed up for Halloween, and hundreds of pictures of fall foods. As late as September, the sun felt so warm that even as its time in the sky ticked shorter and shorter toward the equinox, the intensity of the heat still felt like the solstice.

Even if I could fight time, the battle was already history.

Really, from any other day, Sunday was no different.

Sunday was a gorgeous day. When we walked outside, arms laden with bags, it wasn't different from any other Sunday, the end of just another weekend. It still felt like summer but this time I thought I noticed that the sun was slightly lower in the sky at 2 PM today than it was at 2 PM just a month ago. I couldn't decide whether to let the calendar register against the 80 degree summer air.

I wanted to stay there, holding on, forever. 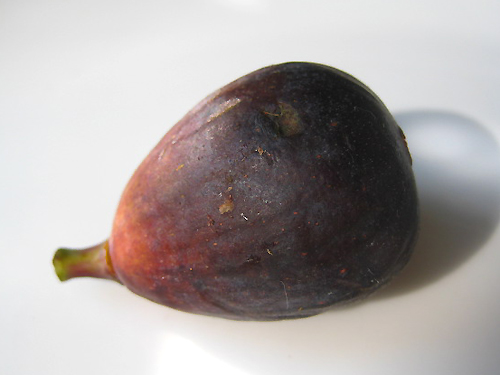 Technically, figs are in season through late summer. However, in southern California, figs will cling to every last ray of summer sunshine, extending their season even into October. Though soft and sensitive, they just won't let go. 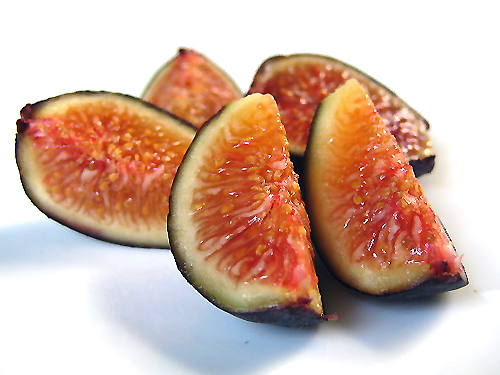 When I made this Fresh Fig Ice Cream, I think I pulled several recipes, culled the best elements from them, and combined them into whatever came out on the other side. Essentially, it's fig compote from David Lebovitz combined with a basic vanilla ice cream recipe (that doesn't use eggs). 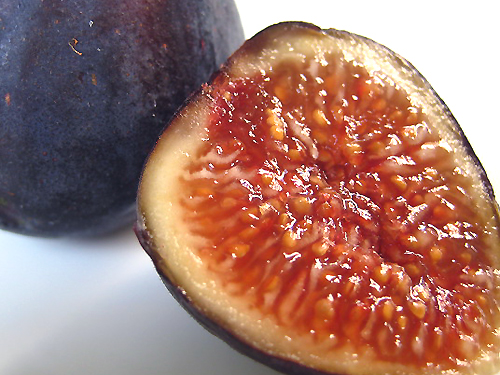 The irony is, of course, that as much as I wish I could stop time, even slow it down, I could hardly wait for the figs to cook down into the compote, was impatient while it cooled, and the 12 hours to freeze the ice cream couldn't come fast enough. 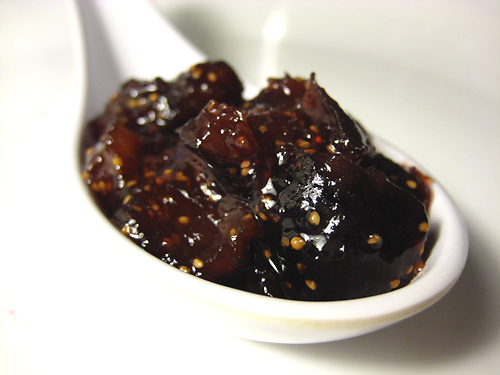