Thanks for playing, everyone! We have given the pair of tickets away and this particular giveaway is closed. But please continue sharing your favorite cocktails in the comments below...

who: You + 1
what: Winning a $500 pair of tickets to Jonathan Gold's Cocktail Party at Union Station on Saturday October 10, 2009
when: Right now
where: Right here and on twitter
why:Because you can't afford this bourgie event otherwise.  Because it will really impress your date to be around bourgie people who can afford this event.  Because you bought a cocktail dress without having an occasion (I may or may not have done this).

Because it's Jonathan effin' Gold. 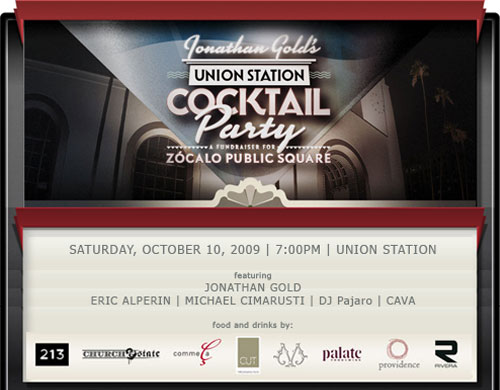 When first I got wind of Jonathan Gold's Cocktail Party at Union Station on October 10, 2009 organized by Zocalo Public Square, I went a little light headed. Partially because the host is my hero, Jonathan Gold, partially because it's a cocktail party, but mostly because the tickets are $500 a pair. Five hundred dollars?! Who has that kind of money to blow on being a guest at cocktail party?! (And where can I meet him?)

But Zocalo Public Square did something very generous this past Tuesday. They gave me a pair of tickets to the event, which is also fundraiser for their non-profit organization. I gasped. I squee!-ed. I gasped again. "Jonathan Gold!"

They also told me I couldn't stalk Jonathan Gold.

IMPOSSIBLE. You just can't put that kind of restraint on love and admiration.

So I agreed to give the tickets away.

HOW TO ENTER THIS TICKET GIVEAWAY

Turn off your twitter and pay attention. This could get complicated. You must do all two steps. (Don't be confused by the third one - it's optional.)

This is the first half of your entry in the random ticket giveaway lottery drawing! It doesn't really matter what else you say, as no special considerations will be given to particularly eloquent or witty remarks, though I can't say that I wouldn't pay more attention to love letters addressed to me. Then again, I did say it was random. Then again, I'm a little bit psycho.

You can tweet anything you'd like related to #JGoldParty, but your tweet must say the following (how's that for passive-aggressive?): "[email protected]: I want to party w @TheJGold for @ThePublicSquare #JGoldParty http://bit.ly/H9jI6 I promise to stay classier than Sarah"

(If you win, you do not actually have to stay classier than me, but it won't be that hard anyway.) Obviously if you don't have a twitter account, you can't do this part. OH WELL.

I'd be shocked if you weren't already, but follow @ThePublicSquare and @TheJGold (neither of them have asked me to request this, but consider this my personal #FollowFriday recommendation, a day early). Following me @TheDelicious is also optional, but since this is my blog, it would be nice.

It may seem like a lot of effort for a pair of free tickets - THREE WHOLE STEPS and one of them isn't even required! - but this is a pair of tickets worth $500 that's supposed to be for a non-profit fundraiser, so essentially, you're stealing $500 from them if you are chosen, so obviously we're going to make you work for it, you lazy a$$. Besides, my Dad always said, "There's no free lunch."

He also said, "Never look a gift horse in the mouth," which has nothing to do with this. I just wanted to throw that in there.

HOW THE PARTY-GOER WILL BE CHOSEN

When the time comes, and baby, it will come, I will collect all the comment entries, throw them into my Cuisinart Ice Cream Maker, churn them, pick a commenter at random, and cross check against twitter for that tweet listed above in #2. If, for some reason, I decide to use a much less manual, much more technologically advanced method of picking a number at random, I’ll do that.

Don't ask me when the time will be. I don't know. It just has to "happen."

Not true! You have until MIDNIGHT tonight to complete your mission. That's 12 hours. I will do the entry collecting and churning through the night. Yes, the entire night. I use an abacus, which means nothing because I'm not counting anything. I will announce the lucky recipient on Friday, what time depends on how my date goes tonight. (Ooh, did you catch that? I have a date tonight!)

Good luck. May the best luck win because THIS IS A GAME OF CHANCE. As you will notice, I have not used any words like “contest,” “prize,” or “winner” that might imply that this is some sort of contest in which the winner wins a prize. There is no one winner. We are all winners. It just so happens that one of us also gets to go to the hottest party in town on someone else's dime.

Now for the legal stuff.

There is no legal stuff!

The Delicious Life is not some big corporation that has a “Legal Dept” with a team of lawyers that writes official contest rules, eligibility requirements, and limitations of my liability to protect deep pockets.

However, I do have a couple of notes.

No purchase necessary. Void where prohibited. Winner (oops) Party-goer need not be present to receive tickets. However, in order to be legible, you must type. You also must promise that IF YOU ARE BLESSED WITH THE TICKETS, you will call upon your inner  Girl Scout and go into hard core marketing mode.

This is a fundraiser for Zocalo Public Square, a non-profit organization. I like them because they put on high caliber, intelligent lectures and seminars about important, pressing shit. I don't understand a lot of it, but associating myself with them makes me feel smart! Zocalo depends on events like this to keep its program successful. You are getting $500 tickets for FREE, so while Zocalo Public Square is being very generous by just giving these tickets to a partying pair, I have far less integrity and am making you promise that you will tweet/blog/talk/buzz your brains out about this event beforehand.

No, I have no way of enforcing this. You could lie but trust me *singsong voice* I will find out. I have been mercilessly deceived before and you know the saying…Fool me once, shame on me. Fool me twice, and I S-W-E-A-R (that's "promise" for those of you who can't spell) that I will lose 30 pounds just so I can crawl through the Internet to your kitchen and use a citrus reamer on you in ways that wouldn't be considered sexy.

Okay! So now that we've gotten the pleasantries out of the way...

Please comment and tweet, even if you can't/don’t want to go to the event. A post with no comments is like that chubby, awkward girl in oversized pink plastic glasses at the middle school dance standing by herself during "Eternal Flame" nursing her shame and wounded heart with a plastic cup of punch.

And you wonder why "Eternal Flame" is *my* karaoke song.