Home » restaurants » Lou Malnati's, Chicago - Domino's Got Nothing on This Delivery

There isn’t a thing – not a thing – that goes into my mouth and doesn’t get logged in “The Database.”

Just by virtue of reading this web+log=blog, you have to be under the assumption that I operate by logging; and if you know nothing else about me save for one thing, you know that I have a slight fascination with lists and data. "Slight." The screeching, burning, metal-tearing, shrapnel spewing collision of these two trainspotting-esque behaviors – logging everything and making lists – is The Database, a frighteningly organized, obsessively thorough spreadsheet representation of the chaos commonly referred to as The Delicious Life. Some West Coast cities plus Sedona have rehab for this kind of disorder.

According to The Database, my third favorite father (first being The Captain, second The Godfather) delivered pizza to my house on Tuesday, March 6, 2007. However, deeper, repeated Ctrl+F-ing through the massive OCD XLS workbook reveals that the last time I actually wrote about pizza here on the Delicious Life was Tuesday September 12, 2006 when the Manning brothers were playing together out on the field, which is exactly six months prior. Exactly. It may seem that I am that good at precision planning, but really, the six months is everything and nothing short of a timing coincidence.

Because if I were that good, I would have waited two more months, making it a precise six months yet again, before posting about Chicago stuffed deep-dish pizza.

I am not unfamiliar with Chicago-style pizza, though I can count the number of times I've eaten it on a single hand. Aside from the innumerable times I augmented my Freshman Fifteen with Zachary's Pizza in Berkeley during college, I had actual Chicago-style pizza in Chicago for the first time at Giordano's during my 12-week associate training – that’s one (1). It was several years later (okay, more like ten) that I slipped into a flight fear-reducing food coma with Gino's East – that’s two (2).

Yup, I’ve got at least two fingers on one hand.

Given that I am not amenable to subjecting myself to the terror of aerial acrobatics in a hundred ton death tube with flimsy pigeon wings, aka "flying," one might wonder how I managed a Windy City delicacy without resorting to some pathetic West coast attempt of cheese and sauce in a doughy excuse for deep-dish crust like BJ's (what a horrible name), Pizzeria Uno, or God forbid, a thick-crust pizza from the Hut.

Technically, I suppose it’s not really delivery, since Lou is “shipping” frozen pizzas in a styrofoam cooler packed with dry ice, but are we going to be that picky about shipping vs. handling vs. delivery and how each of those is so different that they all deserve their own fee from places like Amazon at this point?

When the order was made, I was concerned about how the precious cargo would fare under the grueling conditions of a cross-country journey which would have to be, due to the nature of “overnight shipping,” via plane. What if the poor things were crushed under the backbreaking weight of an unknown neighbor’s shipment of Harry Potter 1,936, the Death of the Rebirth of the Dead Sorcerer Phoenix? What if the walls of the styrofoam cooler weren’t thick enough to act as a protective shield against the harsh conditions of extreme climate changes in the cargo deck, from 140% hot shower humidity of a Chicago summer to ozone level atmospheric chill to desert dry Southern California scorching sun? What if the dry ice sublimated then subsequently condensed into a pchemical pool of water trapped inside the cooler, soaking the pizzas, now decomposing from being unprotected by the styrofoam, into a hot rotting mess of rancid cheese, gluey crust, and fermenting tomato sauce? What if some evil famished delivery guy recognized the markings on the box and decided to accidentally “lose” our $69.95 "standard shipping included" shipment of deep-dish pizza – yes accidentally “lose” a microwave-sized box of pizza – into the trunk of his Honda Civic in the employee parking lot of UPS?!?!

delivered in 24 hours, opened in 24 seconds

By the time the box arrived at my house, I was a fuming, anxious wreck, hardly able to contain my neurotic self from exposing the disastrophe that lay within the three layers of perfect, professional protection.

The pizzas were fine.

Without an entire family to feed nor a house full of guests to entertain, we only needed to bake one of the four pizzas, that alone is already too much for two people since a deep dish pizza is, by volume, the equivalent of stacking four pizzas and welding them together with melted cheese. If my non-Asian calculations are correct, then our box from Lou Malnati’s had the equivalent of 4x4=16 pizzas in it. Maybe it was greed, maybe it was adventure, but it got the better of us because we wanted to try both the simple cheese and the pepperoni. 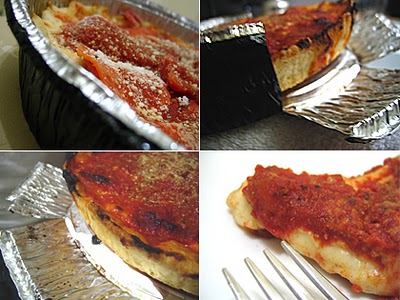 The pizzas are prepared directly in individual disposable pans made of heavy aluminum. While the oven pre-heated, we pulled one each of cheese and pepperoni from the cardboard box. With the same accelerated urgency of lovers before bed, we attacked the pizzas, shredding the plastic wrap, wrecklessly pulling back the edges that were folded inward and over, then finally losing patience and ripping the paper lid from the grasp of the few edges that remained still crimped. The pizzas were red, raw, and ready to be worked into a hot frenzy in the oven. We popped one each of the cheese and pepperoni into the pre-heated oven and waited. It was very very hard to be so patient.

Sipping a cocktail but not tasting, checking email but not registering the words, blogging but not completing any thoughts, I tried to keep myself busy, but it was hopeless. I kept looking back over my shoulder through the archway into the kitchen. The hands on the ticking clock on the wall were moving as fast as Quicktime on dial-up. When the timer on the microwave oven finally buzzed 45 minutes later, I was exhausted with impatience.

The pizzas were beautiful and I gazed upon the bubbling, softly gurgling tomato top to admire for all of about three seconds before we wielded a pair of kitchen shears like the jaws of life to tear through metal and release the pizza. Just the uppermost tips of the sides of the crust had been blackened by the oven's heat, the rest of the crust had tanned about as much as would be healthy for a butter-complexioned Brit.

Chicago-style pizza is made in a very particular way and Lou Malnati claims to have it perfect. Cheese serves as a protective waterproof dairy barrier between soggifying juices and the crust. "Toppings" become "fillings" inside the pizza, and chunky tomatoes blanket the top. When we cut through the pizza, all the layers were there, flowing in slow motion over the edge of the crust onto the cutting board.

Crust recipes vary from restaurant to restaurant. Lou Malnati's has a shortbread-like texture infused with so much butter it seemed to have fried the dough in the oven. Th crust crumbles ever so slightly when pierced with the requisite knife and fork, unlike the bready crusts of Giordano's and Gino's East. The cheese was overwhelming, and though it oozed in the most obscene way cheese can ooze, it had a rubberiness that I didn't expect. The tomatoes on top were soft, sweet, tart enough to register, but lacked a certain spice that I crave. The amount of hot cock I injected into my slice was shameful, but delicious.

Shameful, but delicious. Isn't that how pizza delivery should always be?

** a year ago today, i went from whisper lounge to a scream **
** two years ago today, i was in love with iron chef and guido taught me to cin cin **