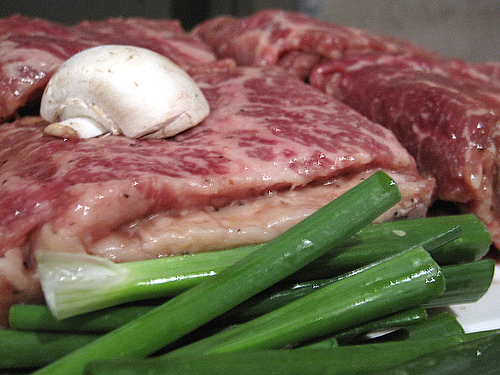 Kind of like brown is the new black or bermuda shorts are the new capri pants, Surah is the new Ong Go Jib.

When my parents were living in Walnut, my family would only ever go to one of two restaurants when occasion called for dining out: New Garden for Chinese or Ong Go Jib for Korean food. I can't be sure whether it's a Korean thing, a Korean immigrant thing, or a Delicious family thing, but once my parents like a restaurant, they will be die-hard regulars until one tiny little thing irritates my Dad and he swears it off forever. They still drive all the way to Rowland Heights for Nah Jo Kee, Jjam Bong and Jja Jang Myun, but when it comes to Korean food, they have moved on to Surah in Buena Park.

Like most everything in orange county, Surah is part of a mega plaza, this one primarily catering to Korean customers, with a Hannam Chain grocery store, smaller Korean restaurants, a cosmetics boutique, and of course, the hahg-won (tutoring center).

Despite its mini-mall association on the outside, though, Surah’s interior has its own, individual feel. A pseudo waiting space is created in the front by a glass encased water and stone garden. The dining area is large room with overhead fluorescent lighting, but has well-placed plants and structures to create smaller sections that feel less chinese-restaurant-banquet-hall like.

There’s a sushi bar tucked away in the front corner, but it doesn’t appear that many people come to Surah for anything but the barbecue. There are probably about 30 tables, able to seat anywhere from 2 to 8 people, and each table is equipped with something I’ve never seen before. they look like water faucets over the grills, and yes, that’s what they are. Because the ceilings are so high, sprinklers have to be mounted at each table for fire safety. That makes me feel better. I think.

The menu looks like any and every other Korean BBQ-focus restaurant in southern California. What distinguishes between restaurants, then, are the things that are not on the menu – the bahn-chan. Surah's bahn-chan, which vary from month to month (I'd say "seasonally," but that might be pushing it). Kimchees are good, as I prefer mine more fresh rather than ripe. There’s a standard kimchee made with napa cabbage, as well as one made with baby cabbage and though they are not on the plate, I can taste the oysters (shrimp?) that were added during the preparation. Ggak-du-ghee is a common kimchee at Surah, and there is occasionally some creative version made with leaves of mysterious vegetables. 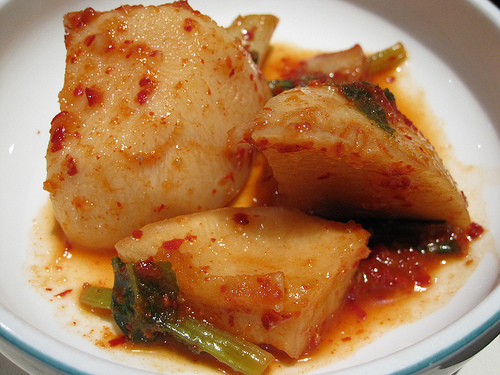 There are some things that even Iknow aren’t really korean. Greens and julienned scallion “salad” is tossed with a homemade soy sauce, garlic and ggoh-choo-ga-roo (red pepper flakes) vinaigrette. I have to laugh, calling it a “vinaigrette,” which sounds as if there were a recipe, fancy and non-korean, but that’s basically what it is. I eat mine when it gets to the table, but others like to save it to eat with the barbecue. And though i see it everywhere, i still think it’s funny that good ol’ picnic style potato salad is bahn-chan. Surah's is a strangely vibrant yellow, cut into a perfect block. I thought it was egg salad when I first saw it. 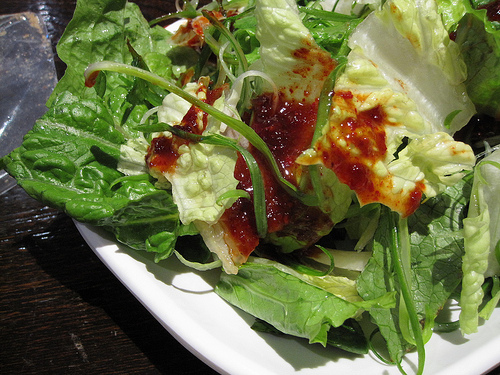 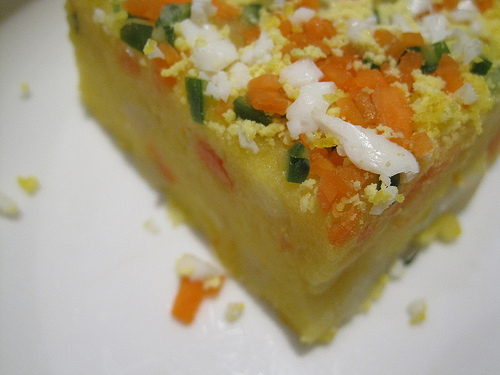 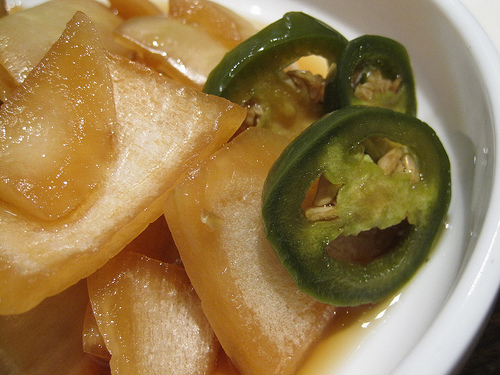 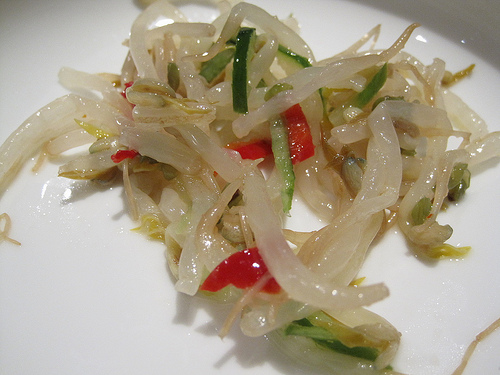 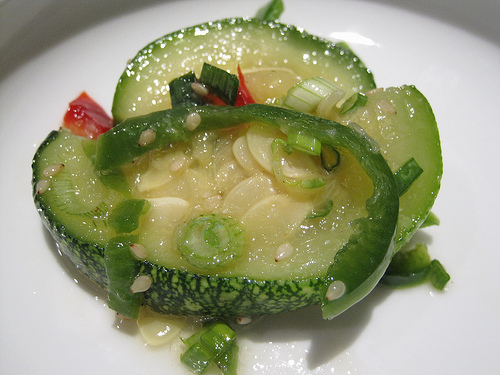 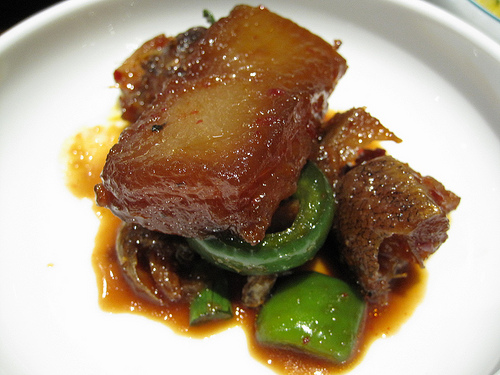 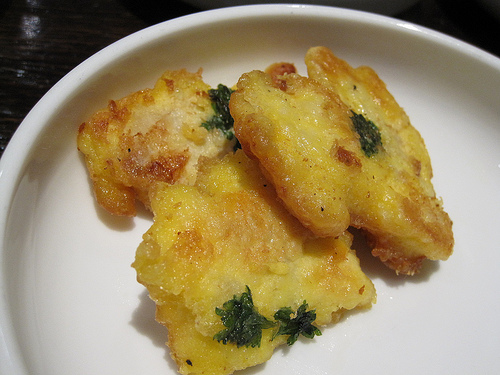 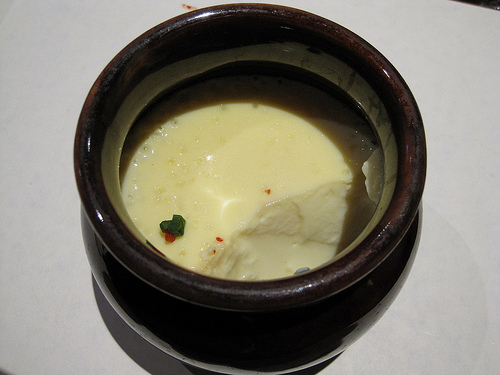 Galbi and bulgogi are traditionally marinated in a sweetened soy sauce, but it just feels like Korean restaurants, including Surah, realized that sweetness was good, and thought more would be better. It’s not, and that’s coming from a girl whose tooth is so sticky sweet it’s decaying right out of her head. I like that we order a lot of barbecue items that are saeng (plain, or without marinade). For these, Surah has the traditional (I think?) dipping sauce made of salt and pepper in sesame oil and the more recently usual dipping sauce made of chili sambal. 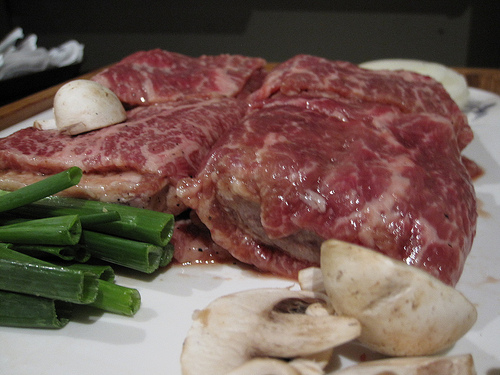 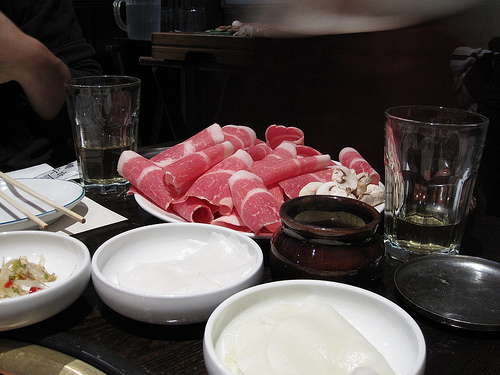 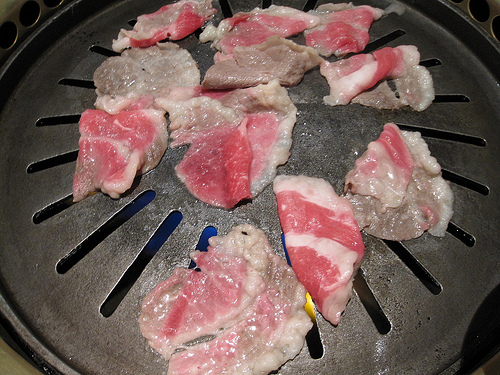 Salt and Pepper in Sesame Oil and Chile Garlic Dipping Sauce for Cha-Dohl-Ba-Ghee: 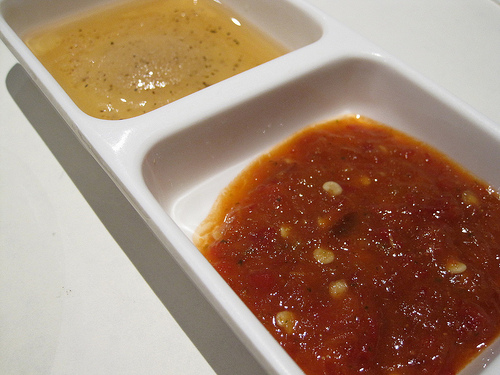 There are two dishes that Surah has that I had not tasted until only recently partially because they were never part of my childhood so they fall into the same category as macaroni and cheese and casseroles ("Wow! So new and foreign to me!"), and partially because I think they are rather new developments with respect to Korean cuisine anyway. Of course, I could be totally inaccurate on the latter statement because I am the equivalent of a white person who was born and grew up in rural Ohio. I'm not trying to be racist. It just comes naturally.

One is dduk bo-ssam and radish, paper thin slices of dduk and radish used to make tiny barbecued meat and rice wraps. I don’t like them as much as the regular ssam, red leaf lettuce, and in fact, like many things, I don’t like wrapping meat in anything at all. Just plain barbecued beef with a grilled garlic slice and the den-jahng, fermented soy bean and red pepper paste. “fermented” and “bean” don’t make it sound too good, but it definitely tastes great. 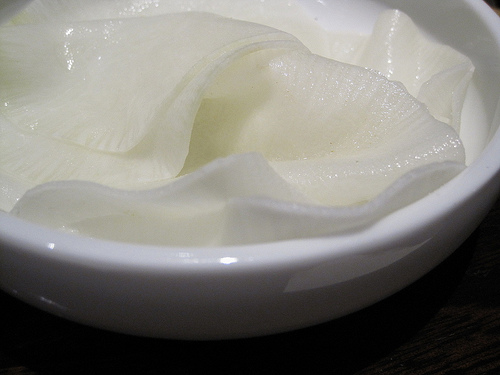 The other dish is Genghis Shabu Shabu, which is a Korean version of the Japanese simmering hotpot. Growing up, our Delicious version of shabu shabu at home was Japanese because I think my Dad might hated his Korean self more than I do now. The Korean-style shabu shabu simply changes it up by using a flavored broth, yook-su (which I could drink straight out of the ladle but don't because that would embarrass my parents almost as much my not being married). Most of the components are the same: paper-thin slices of meat, tofu, konyakku, noodles, and piles of shredded vegetables like napa cabbage, green onions, carrots, sprouts. I have no idea why it's called "Genghis." I bet it has something to do with Genghis Khan, but I'm too afirad to ask my Dad because I don't have time to listen to the entire history of China. 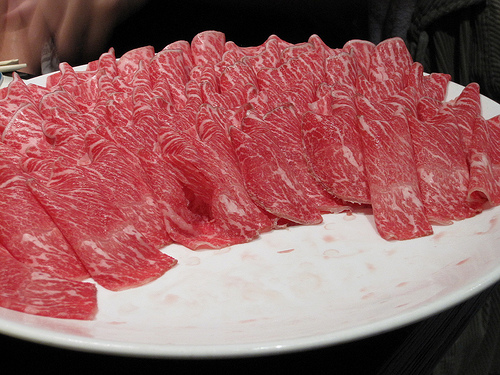 At the end when all the meat has been snatched off the grill, the servers make jook right there at the table. They add rice, broth, and eggs, stir it all together, and let it cook down to a thick porridge. I am not fond of jook, but it seems lots of people come to surah specifically for that end of meal specialty. i’m usually so full of bahn-chan and beef by the end that i can’t even sip the regular sik-hae (sweet rice punch with pine nuts) or su-jung-gwa (spiced persimmon punch) for dessert. Incidentally, even if I hadn't eaten for six days, I'd probably pass on shik-hae, since it looks like dirty dish water.

Now all we have to do is discover my family's new New Garden (korean chinese)! 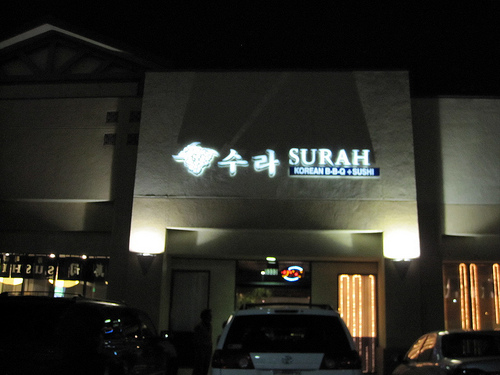