Inspired by Jonathan Gold's review of the recently remodeled Indo Cafe in West Los Angeles, I reached deep down into the dark, dank recesses of my mind and revisited Indonesia without a passport...

It is a well-known fact among friends and family, and I guess here in my Delicious Life, that I don’t fly. It’s not that I’m afraid because I’ve never flown before, nor is it that some sort of traumatic flight experience scarrred me for life. Quite the opposite actually. I flew twice a week, every week, sometimes even more frequently, for almost five years, and it went smoothly every single time. Perhaps I began to think that by increasing the number of times I fly, I was exposing myself to more risk, thereby increasing my chances of being involved in some horrible airline tragedy.

Anyone who has spent even just a half hour at the craps table in the Bellagio knows that statistically, this just isn’t true, no matter what you tell yourself and the last three dollars to your name at 4 am after six “free” vodka/red bulls. The chance of winning does not increase the longer you stand there at the table performing voodoo on the dice. The chance of crashing does not increase the more I fly. I believe it’s something called independent events, and though I didn’t do very well in Stats, I can understand how absolutely ridiculous my aviophobia is. But the problem is exactly that – it is a phobia, and phobias are always irrational.

This no-fly zone in my life poses quite a problem, given my very curious and adventurous palate (that’s “adventurous” in terms of flavors and spices, not animal organs or small creepy crawly things). I want to travel around the world to try new cuisines, but it sure will take a long time by boat and car. So for now, I relegate myself to reading books about faraway foods, trying my hand at international cuisines, watching Tony Bourdain, and dining out at ethnic restaurants that are accessible by non-gravity-defying transportation.

(This whole flying thing is a very urgent, immediate problem, given that somewhere in the great reservationing system in the sky, there is an LAX/ORD ticket with my name on it. In just a few short days, I will be jetting off to make lemonade on Lake Michigan with the whole crate of lemons that Life served me a few weeks ago. Let’s just cross our fingers and hope that xanax truly is God’s gift to human anxiety.) 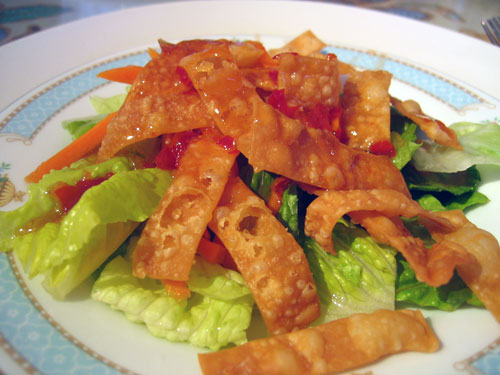 If I’m not going to fly, then perhaps the best place to live is right here in L.A. I live in LA, and I might even go so far as identifying myself *gulp* as an Angeleno, but I admit that food-wise, LA has a long way to catch up to New York and San Francisco (and a few other cities, according to Bon Appetit in September). LA isn’t quite top-notch dining-wise, except when it comes to breadth and depth of ethnic cuisines. There is nowhere else in the U.S. where you can travel from (albeit a long, slow, road-enraging drive) from Japan to Thailand to Korea to China and back through Ethiopia, down to Vietnam, swing through Guatemala and El Salvador, complete a circuit around the Mediterranean and still be home in time for Iron Chef at 11 pm. And no, your local mall food court and the Epcot Center do not count. 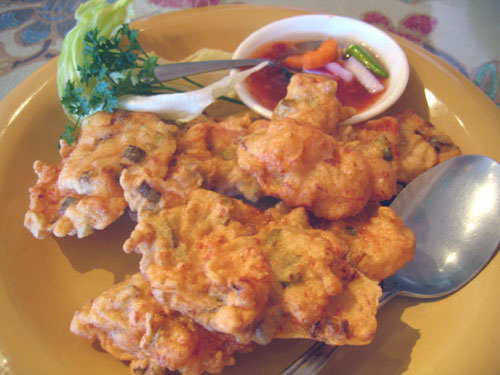 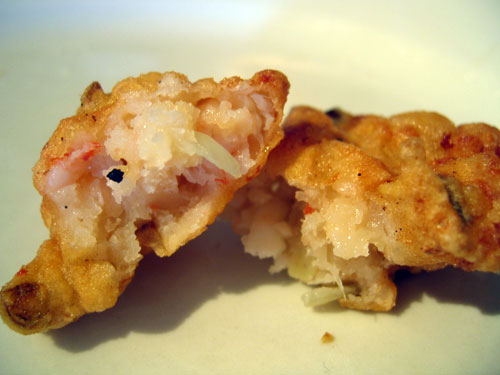 I am willing to bet my passport that LA has at least one representative restaurant from every cuisine around the world. Yes, we have the Asian Majors: Chinese, Japanese and Korean (that’s my K-pride kicking in – calling it a “major”). But there is also a sizable contingency of other Asian cultures like Indian, Thai, Vietnamese, and we can go into as much detail as Nepalese. Recently, I was introduced to Indonesian food at Indo Café. 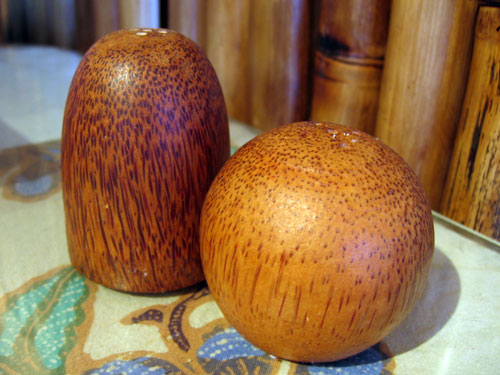 Without knowing anything about Indonesia’s culture, religions, or even topographical geography, I would guess that the cuisine is similar to Indian, simply by word association. When we spotted the Indo Café’s sign driving up National Boulevard, saw the bright red paintjob and faux thatched roof details, sashayed past the tables on the sidewalk
covered with colorful batik printed fabrics, shimmied through a doorway hung with strands of beads and sat down at a small table against a bamboo-lined wall around a room with island-inspired accents, I knew it was going to be less like Indian and more like...I had no idea.

Our server was dressed in a long, white tunic made of a sheer, linen-like fabric, what I am going to assume is traditional Indonesian clothing. She handed us menus, poured glasses of water, and left behind a tiny square dish of seasoned peanuts. As deliciously oily as they were, they must have been fried, or at least sauteed, with peanut oil, red pepper, and salt. It was a little appetizer that was incredibly addictive.

Indo Café's entire menu was new to me. I recognized some ingredients and preparation techniques, but names of dishes, flavor combinations, and even certain spices and herbs were foreign. I had no idea where to start, but we thought the section called “Appetizers” would work. LOL! We debated between a tofu dish and and shrimp cakes, and eventually, deep-fried delight won out over health. To help us get through the rest of the decision-making process for the main event, the server brought us small salads of plain Romaine lettuce dressed with an incredibly sticky sweet, lightly piquant dressing. The fried strips of won ton skin on top won me.

The server had described the shrimp cakes to us, which sounded to me like they would be the shrimp equivalent of a crabcake. When they came to the table, I was first surprised by how many there were (that’s a lot for an appetizer!) and second by what they looked like. They didn’t look like the typical chubby disk-shaped cakes coated with breadcrumbs and fried deeply golden-brown. The shrimp cakes were amorphous blobules of thick, tempura-like batter mixed with chopped shrimp and vegetables. They were more like fritters than cakes. They were obviously deep fried, but looked a little pallid, and when split open with the side of my fork, I understood why. They looked like they could have used about 30 seconds longer in the deep fryer. I took a bite, and though the seasoning in the batter was good, it only hinted at shrimp, and was suspiciously doughy and sticky. Dipped in the accompanying sauce, it was better, but only marginally. For the main event, I asked the server what was popular. She pointed me toward a chicken dish. I asked her if it was spicy. She said no, so I asked her for another recommendation, which again, I asked whether it was spicy. She said no. I guess I hadn't made it clear that I am Kimchee Spice, the long-lost member of that girl band, so I asked for a third recommendation, this time explicitly asking for something spicy. She nodded slowly in understanding, and said they could make anything spicy. I ordered the chicken. 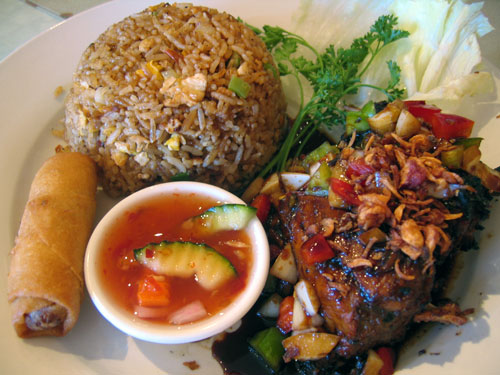 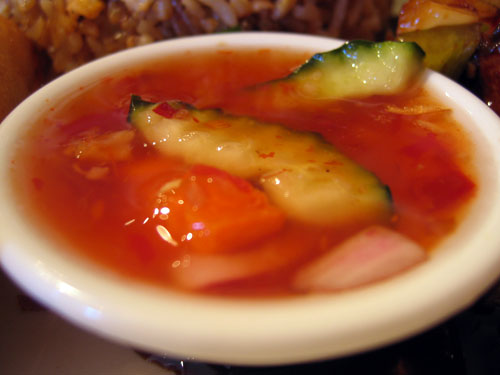 The dish came out in a lovely presentation, with my choice of fried rice (as opposed to white rice) molded into a perfect dome, a springroll, chicken garnished with deep-fried peppers and vegetables like confetti, and a small shallow bowl of marinated vegetables in juice. This might also have been a dipping sauce for the springroll, but I am not quite sure – I ate the vegetables like they were pickles (that’s my kimchee habit). The springroll, unlike the shrimp cakes, had been fried to a golden, flaky crisp. I was expecting the fried rice to be salty because it was such a dark brown, but it wasn’t. In fact, I don’t even like fried rice but Indo Cafe’s tasted pretty good to me. It was a little different from the usual Chinese restaurant fried rice, though I can’t tell you specifically how it’s different.

As dark and faintly tinted red as it was, I was expecting the chicken to be quite spicy, so I braced myself for the rush of glowing heat. Apparently, because I didn’t order the chicken and say, “Make it hot, Baby!” in the same breath, the chicken was not made spicy at all. I was mildly disappointed, but asked for hot sauce. The chicken was a fairly large piece of breast on the bone, marinated then grilled. It was tender, though a little dry (it is chicken breast after all), and well-seasoned, but sans spice. The hot sauce was not the sriracha or sambal I was expecting, but a small dish of a fairly thick brownish red paste that looks a bit like Korean dehn-jahng. It wasn’t bad, but I was a little unprepared for the strongly fishy fragrance that wafted up behind my eyeballs. I think it was sambal mixed with fish sauce. 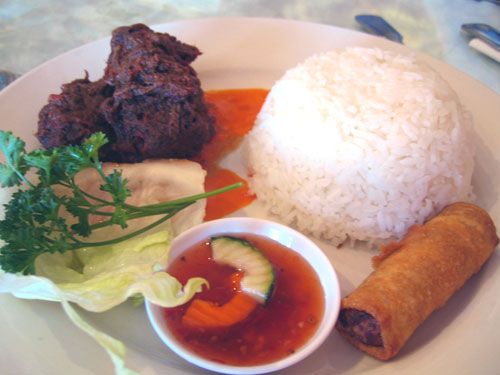 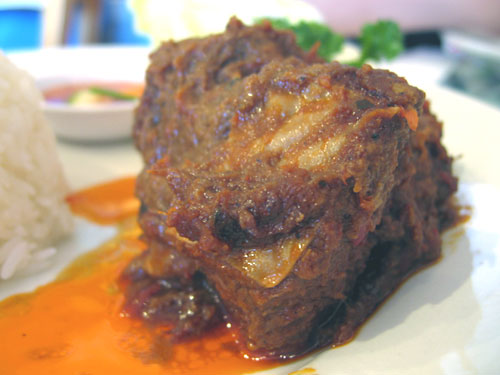 The other dish was beef, and dammit I need some serious help with names here (and with everything else, for that matter). Again, it was in the same lovely presentation with a dome of white rice, a spring roll, and the bowl of pickled vegetables. The beef was almost spherical, weeping out from underneath a translucent reddish orange oil into a shimmering pool on the plate. The beef had an interesting texture on the outside, and I think I might have used the word “furry.” I couldn’t quite figure out what was giving it that appearance, whether it was some sort of coating that had been added, or whether it was the flesh itself, long beef fibers breaking down from an extended braise into baby tendrils. The beef was still on the bone, but cooked long enough to pull away from the bone without much resistance. The actual meat was tender to the teeth and had an earthy, yet tangy flavor that I can’t describe other than...earthy and tangy.

The cuisine is sort of Chinese on Gilligan's Island having a side affair with Thai. There’s a lot of seafood, a lot of grilling, lots of interesting spices and soy sauce with a noticeable emphasis on sour, though not like the Thai use of lime, as well as sweet. I liked Indo Café
enough to go back to the restaurant and try some the other dishes, with an explicit request for serious spice. I might even hit up Ramayani, another Indonesian restaurant in Westwood for a broader experience. However, I didn’t love Indonesian cuisine enough to hop on the next flight out to Jakarta. I’ve got to make that three and a half hour flight to Chicago first. A three hour tour...a three hour tour...

Who else traveled to Indonesia via Indo Cafe?

~ Jonathan Gold recommends: martabak, roti canai, fried chicken, nasi bungkus, lontong cap go men.
~ Potatomato has a great photo of the crushed ice and raspberry Syrup dessert Es Campur
~ EatingLA liked the spiciness but could have taken more
~ Back in 2005, it was an la.foodblogging favorite, and again in 2006
~ Foodie Universe says it's a great introduction to Indonesian cuisine