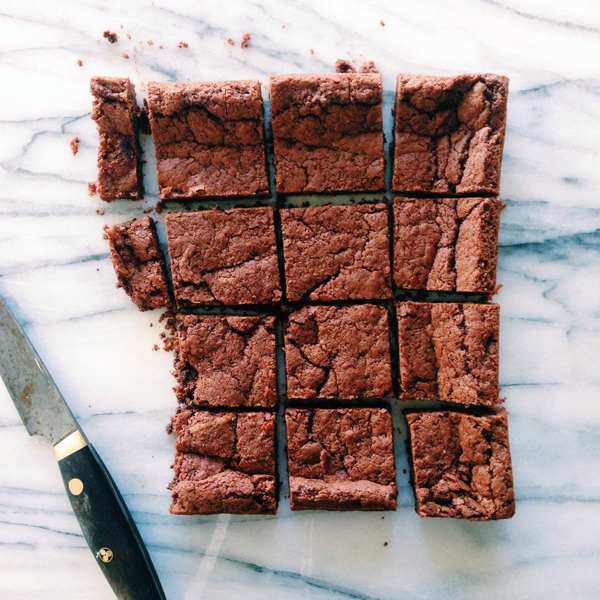 The entire left side of the pan of brownies? Hm. I have no idea what you're talking about...

THAT entire left side of the pan of brownies.

I baked brownies the other night in a desperate, symbolic attempt to regain the control that had been yanked out of my hand, slammed into the stone floor face down, and shattered into 10,000 glass shards.

I had annhilated my iPhone.

A broken iPhone screen normally would not be a very big deal, but still a big deal because when is anything in The Delicious Life not a big deal? But was a VERY big deal because it was the third time this year I have dropped my iPhone to the same outcome. (What is it they say about the psychology of doing the same thing over and over but expecting a different result? Oh, right. Totally cliché.) You would think that an inherently careless, clumsy bitch like me would, from the get-go, invest the $99 or whatever it is in AppleCare, or carriers' insurance, or for god's fucking sake, ninety-nine cents on a protective case. But I'm not only clumsy, I'm also fucking forgetful and even after a second time spending yet another $190 on a new screen making my twice-repaired phone now more costly than my brand new car, I still did not take precautions.

It's not about the money, though it does hurt my deeply budget-minded, first-born to a Korean immigrant family seoul that I essentially would have spent the same amount paying full retail for a 24-karat solid gold iPhone17s that doesn't even exist for three more years that I have now spent for three repaired screens. It's more about why I can't seem to keep my shit together, at least as "shit" refers to physical objects. There is of course, an entire series'-worth of therapeutic blog posts that will come from that statement, but for now, let's just say that the 8x8-inch pan barely made it from the oven to the counter before I attacked the pan with only the clean utensil left in my kitchen and numbed my senses both literally and figuratively with silver serving spoonfuls of scorching hot Panic Brownies straight from the pan.

I forgot to offer a brownie to the mobile iPhone repair guy who came to my house and fixed my phone on the spot. I also still haven't put a case on my now three-times repaired phone.

These are Panic Brownies, brownies you bake in a total panic in the middle of the night without a real recipe because you don't have a recipe that you would, under saner circumstances, you know, pull up on your phone. The ingredients ratios are just ever so slightly off from most brownie recipes because it is much easier to dump "1 cup of flour" and "1 cup of flour" and "2 eggs" into a bowl than to try to remember "1 cup plus 2 tablespoons of flour," "two-thirds of a cup granulated sugar plus one-third cup brown sugar," and wtf?! "1 egg plus 1 yolk."

makes one 8x8-inch pan of brownies, which can serve 8, but probably more like 1

In a medium saucepan over medium-low heat, melt chocolate and butter. (Most professionals use a "double boiler" method — a metal bowl over a pot of simmering water — and would slap me for such flagrant chocolate-melting misconduct. Whatever. This is a panic recipe). Remove pan from heat just before everything melts. Residual heat from the saucepan will melt whatever chocolate and/or butter is still intact. Allow to rest off heat to cool slightly, about 10 minutes.

Sift together flour and baking powder.

Whisk sugar into butter/chocolate in saucepan until sugar sounds like it is starting to dissolve. Beat in eggs, one at a time, then vanilla and salt. Gently stir flour/baking powder into chocolate mixture. Scrape brownie batter out of pan into parchment-lined pan.

Bake brownies for 25 to 30 minutes, or until a toothpick inserted into the center comes out clean.

Allow brownies to cool in pan for about 10 minutes. Carefully lift brownies out of pan with parchment paper and onto a cooling rack or cutting board. Once completely cooled, cut brownies. Obviously, I didn't allow the brownies to cool, in the pan for five minutes or otherwise.

** in moments of this kind of panic and desperation, just use whatever chocolate — baking bar, chips, chunks, hell truffles from the candy jar — you have. Then again, if you're that desperate, fuck the brownies and just shove the chocolate into your mouth as is.