Every girl has one. Every girl has that guy that she’s “just friends” with. You’ve known each other for I-don’t-know-how-many years, but you’ve never once been attracted to him. No really, you’ve never ever been wildly attracted to him (it is possible for girls, you know) and the idea of dating him, well, makes you snortle because you’ve always been, and always will be, “just friends.”

Best Pumpkin Pie Recipe from Cook’s Illustrated is below. Skip ahead.

Now, he’s not your best friend because, for one thing, you’re only besties with girls, and besides, he doesn’t even live in the same city, so how can you be BFFs with someone you can’t go shopping with everyday? You get along just fine, and when he does come into town to visit family, or even, say, a girl who he’s dating, you and he will at least grab dinner. Whenever he’s around, you hang out, and heck, even though you’ve never been attracted to him, if you’ve been deprived of, well, you know, you might even play a little, but it’s so totally understood between both of you that this is so totally platonically physical.

It’s not like his laugh forever echoes in your ears, or his adorable crooked smile is emblazoned on your brain, or you get hot flashes in the middle of Whole Foods for God’s sake because you are always thinking about him. It’s not like you get butterflies the way you do when that guy from twitter direct messages you.

You guys are “just friends.”

The thing is, all your BFFs and your family adore him. They love him. They think you and he should totally get married one day and why don’t you guys just try dating? They don’t understand why you aren’t all over this amazing, charming, funny, intelligent guy, and aren’t those all the man-characteristics that you talk about on your “list?”

You don’t understand why you can see what they’re saying, but you can’t see what they’re saying, you know what I’m saying? You don’t not like him. Actually, you kind of wished that you did because, hm, now that they mention it, they’re right. He does have all the right characteristics, and you guys do get along so well, and if it actually worked out you wouldn’t have to waste all that time. You want to like him.

You don't know what it is. He’s just sort of...you don’t know. You just can’t be passionate about him. There’s something missing. That spark. That je ne say what. The wildly passionate chemistry is not there to take it from *shrugs* we’re-just-friends to *shriek!* clothes on the floor the minute you walk in the door.

Pumpkin Pie and I Are "Just Friends"

It’s an ambiguous relationship. Perhaps “relationship” isn’t quite the right term to explain how I feel: I don’t love pumpkin pie, but I so desperately want to.

I love all things pumpkin. Pumpkin bread? Every day until February. Pumpkin Spiced Layer Cake? That's basically the bread with frosting; even better.

Some of it has to do with falling victim to the warm spices that are always used with pumpkin. I love cinnamon, cloves, ginger, and nutmeg with pumpkin in breads, muffins, and pancakes. If pumpkin were usually cooked with say, cilantro, I don’t think I’d love it as much.

Unlike with pumpkin, my relationship with cilantro is very clearly defined – I fucking hate cilantro.

Now don’t get me wrong. It’s not that I hate pumpkin pie, or even to a lesser degree, that I don’t like pumpkin pie. It’s just that I don’t looooove pumpkin pie the way some people do. In fact, when it’s around, I eat it without thinking twice. I mean, for God’s sake, it’s still a pie. I’ll even eat leftover pumpkin pie that is sitting in the refrigerator because every guest who offered to “bring dessert” brought pumpkin pie instead of thinking to bring pecan or apple. I’ll peel back the plastic cling wrap from the pie dish that’s wedged between a tupperware of mashed potatoes and gallon-size ziploc bag of turkey breast, not even bothering to remove the pie from that middle shelf because I’ve contorted my post-Thanksgiving bloated body so that my ass can prop open the refrigerator door while I sneak five or six bites straight from the pie dish with my fork.

Did I just reveal too much about myself there?

It drives me mildly insane trying to understand why other people go completely bonkers over pumpkin pie. It isn’t bad (have I said that a few times already? I just don’t want to get flamed by all the pumpkin pie devotees out there), it’s just that almost always, the crust looks and tastes like soggy cardboard, and the pumpkin pie filling, which can be wonderfully fragrant and flavorful with rich spices, always has the mealy, squishy consistency of Gerber. Now that I think about it, another key ingredient of pumpkin pie, evaporated milk, kind of reminds me of infant formula, too.

It's that B!tch Libby's Fault

Libby’s. I blame it all on Libby’s and the recipe for Libby’s Famous Pumpkin Pie on their can of pure pack pumpkin.

They make pumpkin pie too easy. In an effort to sell their monster cans of pumpkin pie, they give you a recipe that makes two 9” pumpkin pies, and make it sound like it’s easier than heating up a Lean Cuisine in a microwave oven. All you do is dump eggs, sugar, and evaporated milk into a bowl, mix it up, pour into unbaked pie shells, and throw them in the oven.

Somehow, I think they are subliminally telling you to buy Pillsbury pre-made pie crusts instead of making the pie crust from scratch. Libby’s famously easy pumpkin pie comes out famously soggy, famously squishy.

I don’t love you, pumpkin pie.

But we can still be friends!

Pumpkin pie is just my friend.

Something Happened on the Way to...

And then something happens. You’re running an errand, stopping off at the market, and your friend tags along just for the hell of it. While you’re standing in line and he’s rummaging through your purse looking for your club card because he knows you hate to not get that club card discount, you look at him with your head slightly tilted to the side. Did you do something with your hair? “Yeah, put some gel in it,” he replies, punching your telephone number into the keypad because the card is on the other keychain at home. Is that a new shirt? “Yeah, just got it. Cool, huh?”

Very cool. And weird, because suddenly, he looks different to you, but you don’t think it’s the gel and the new shirt. He looks hot. Very hot. You snatch the celery and eggs, grab his hand, and run for the car, dragging him behind you.

That is what happened to me and my "just friend" pumpkin pie. I ran into a recipe from Cook’s Illustrated for the best pumpkin pie. It promises a flaky, crisp crust. It promises a smooth, delicious, and firm filling. I baked it, sort of unsure of how I’d end up feeling.

After a little more effort than the damn Libby’s-like recipes we’re used to (pre-bake the crust and cook the filling on the stovetop to hot), I slipped it gently into the oven. When it came out of the oven, slightly longer than the prescribed 25 minutes, I let it cool down. When it was time to try it, I pierced through that soft, quivering custard with an 8” chef’s knife and pulled out a perfect, enormous piece. It was heavy. I put the piece on the plate and I wanted it naked, but I surrendered to the gentle pleas for whipped cream (not the Cook’s Illustrated brandied whipped cream, just plain), and I took a bite.

After all these years, I finally fell in... like.

A very very strong like. Not love yet, since after so many years of “just friends,” these weird new emotions with someone with whom you’ve never experienced them takes more time to get used to, but yes, the spark was finally lit. I had to call Mom and tell her.

Pumpkin pie and I? There's a little something going on between us now.

Of course the standard super easy recipe on the back of the can of pumpkin puree works. As in, you end up with something that looks and tastes like pumpkin pie. However, the Cook's Illustrated recipe is definitively better. And if you're going to the effort of baking a pumpkin pie from scratch, why not take just these few extra steps and make it truly great? Here's how and why this recipe is better:

What You Need for the Best Pumpkin Pie

The ingredients for this pumpkin pie are not all that different from the usual recipe on the back of the can. The big difference is using heavy cream and milk instead of evaporated milk. This is what you need:

For the standard butter pie crust, you will need:

Cook’s Illustrated published a second pumpkin pie recipe in 2008, which is a different recipe from this one from 1993. To be honest, the newer version is not as good as this classic recipe for a number of reasons, the most important of which is the inclusion of canned yams, to which I am categorically opposed in a pumpkin pie.

(I am also categorically opposed to canned yams in general but that's a topic for another day.)

Click on any of the images below to shop the tools and equipment!

TIPS and TRICKS for Pumpkin Pie

Refrigerating pie dough. You can make the dough for pie crust in advance through Step 2, cover in plastic wrap, and keep in the refrigerator for up to 2 days. When you’re ready to bake the crust, remove the dough from the refrigerator and continue to Step 3 to roll out the dough.

Freezing pie dough. You can make the dough for pie crust in advance through Step 2, cover in plastic wrap, place in a plastic freezer zipper bag, remove all air, and seal, and keep in the freezer for up to 6 months.

Thawing frozen pie dough. Plan one day ahead. When you’re ready to bake, remove the frozen pie dough from the freezer and let it thaw in the refrigerator overnight. Continue to Step 3 to roll out the dough.

Storing leftover Pumpkin Pie. Pumpkin Pie will keep, covered, in the refrigerator for three days. After three days, though it may not technically go bad, the crust will definitely get way too soggy to be a pleasant eating experience. If you are able to seal pumpkin pie in an air-tight bag or container, you can freeze it for up to two months. Pop frozen pumpkin pie into a 350 oven until it’s thawed and almost toasty. 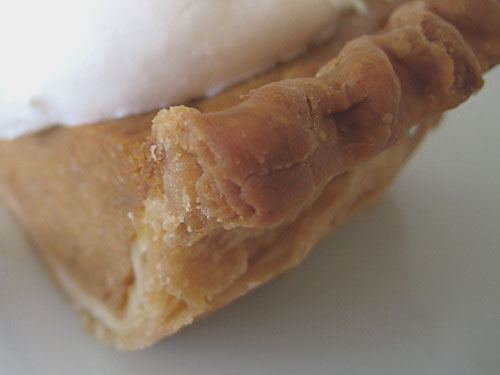 This is the original Pumpkin Pie recipe from the 1993 Thanksgiving issue of Cook’s Illustrated. I have made adjustments over the years to improve the recipe for my and my family’s personal tastes. They are included in parentheses! Additional notes on ingredients and shopping resources are included after the recipe.
Course: Dessert
Cuisine: American
Keyword: pumpkin, thanksgiving
Servings: 8 servings