For all the (chosen) peeps and your adjacents, latkes, smoked salmon, and caviar on an epic Hanukkah Board to celebrate the holiday.

The foundation of the Hanukkah Board is of course, golden fried latkes. Apple sauce and sour cream are traditional toppings for latkes, and after that, the options for accompaniments and garnishes are endless. If it were up to me, the entire board or platter would just be Smoked Salmon Latkes topped with caviar, but what's the fun in that? Here are the general categories of things you need to make it a big fun colorufl board:

You can use a large wooden board to serve the Latkes and Smoked Salmon as a true board. However, when I serve hot/warm foods like latkes, and seafood like smoked salmon, I usually serve on a ceramic, stone or porcelain platter, which keeps foods at their serving temperature a little longer than wood.

Links to boards and platters I use in the Tools and Equipment section below.

Can I Use Something Other than Potato for Latkes?

We found cauliflower latkes, pictured above, and in the lower right corner of the board, shaped like what else? Flowers.

(These are actually sold in the store as cauliflower "pancakes," not cauliflower latkes. Minor technicality.)

And we included sweet potato waffle "fries" as well as various potato chips, which are all in keeping with the Hanukkah tradition of fried foods.

Ingredients Notes and Resources for Latkes and Smoked Salmon

Fresh Fruit and Vegetables to Add Color to Your Hanukkah Board

These are the best tools and equipment you need to make a Latkes and Smoked Salmon Platter. More than likely you already have everything because the platter doesn't require anything fancy, but in case you need... 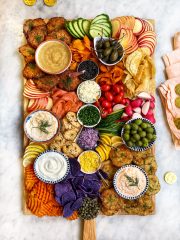 Bases for Smoked Salmon and Caviar