Cauliflower Steaks get the Sicilian treatment with subtly sweet golden raisins, crunchy pistachios, and garlicky crisp breadcrumbs, all with a California vibe. Shall we?

What is a Cauliflower Steak

Cauliflower Steak is a slab, or "steak," cut from a whole cauliflower head. The main center stem is left intact to keep as many of the florets together to create the "steak."

The steaks are prepped and cooked the same way regular beef steaks are cooked—grilled, pan-seared, or roasted. Because the cauliflower steak has two broad, flat sides, more of the cauliflower area comes into direct contact with the cooking surface for browning and caramelization.

Depending on how big the cauliflower is and what, if any, kind of sauce you add, Cauliflower Steaks can be a light vegetarian main dish or a hearty vegetable side dish.

This recipe uses these California-grown ingredients:

Let's dive into some of the farmers and producers who grow some of these key ingredients!

Fruit and Nuts in the Central Valley of California

California is the leading agricultural state in the United States. It grows one-third of the vegetables and two-thirds of the fruit and nuts that we get in the country. California is also the sole producing state of almonds, walnuts, olives, artichokes, dates, raisins, kiwifruit, clingstone peaches, pomegranates, and sweet rice (mochiko). Within California, the Central Valley, made up of the Sacramento Valley to the north and the San Joaquin Valley in the center and south, is the most productive agricultural region not just in California, but the world.

This past October, I traveled to the San Joaquin Valley for an agri-tour of the region with my friends at California Grown. The tour was specially planned to coincide with California Farmers and Farm Worker Month, an entire month dedicated to recognizing the actual people who grow, harvest, process, and distribute the agricultural bounty of California. We visited working farms that were in the middle of harvest and learned so much about how much work goes into growing our food.

Dried-on-vine raisins, or "DOV" for those of us in the know now, are exactly that. Farmers leave the grapes on the vine to dry under the sun-dappled canopy of the grape leaves, rather than picking grapes off the vines and spreading them out on the ground to dry in the sun. DOV raisins have a characteristically plumper texture, and sweeter flavor without caramelization.

We visited River Ranch, a farm in Madera that grows DOV raisins, and did a harvester "ride-along" to experience what it's like to operate the machinery. No, no one from our group actually got to drive the machines because operating the harvesting tractor and the associated trucks and trailers requires skill and coordination.

Raisins, along with dates, dried figs, and prunes make up the Dried Fruit Coalition. California grows almost 100% of the US production of each of dates, dried figs, prunes and raisins. Peep some of the best ways to get the health benefits of prunes into your kitchen with these recipes and ideas:

Where and How do Kiwi and Figs Grow?

If California produces dried figs, we're obviously growing fresh figs, too! We visited Catania Worldwide, which grows a wide variety of produce in California including citrus, figs, kiwi, and persimmons. We were able to see kiwi growing on their vines, just like grapes, and then watch both kiwi and figs get packed for shipping inside Catania's processing facility.

Coming from Los Angeles, my only exposure to pumpkin patches are the "patches" that sprout up overnight on various vacant corner lots around the city, covered with hay and scattered with pumpkins that have been trucked in from, quite literally, farther afield.

Though it may be a little too far off from Los Angeles, Sweet Thistle Farm in Clovis, CA has an actual pumpkin patch that grows actual pumpkins that you can see on the vines right there in the field, and yes, obviously this was super exciting to me. Our agritour team cut a few pumpkins right off the vines, specifically the Long Island Cheese variety, which are the best type of pumpkin for baking.

Sweet Thistle Farms also grows flowers, so we wandered among flowers that are in season in the fall, and created centerpieces with pumpkins, succulents, and flowers. Peep a tutorial over on the California Grown blog here.

Central Valley is the Largest Producer of Wine in California

Though Napa and Sonoma get all the attention for wine in California with Paso Robles and Santa Barbara not far beyond, the region that actually grows the most wine grapes is the Central Valley. We visited two local wineries, Quady Winery which specializes in dessert wines and vermouth, and San Joaquin Wine Co.

Curious About Agriculture in Other Parts of California?

I have been hashtag-blessed to be part of the content creator team for California Grown and California Wines, and have gone on a couple of trips to visit agriculture and wine regions. Peep below:

Any dry white wine that tastes great to you in the glass will taste good in the dish. In keeping with the California theme, pick a California Sauvignon Blanc with citrus notes.

For Wine Pairings to drink with the finished dish at the table, see the section below!

Pistachios. I buy shelled, raw pistachios in bulk, and pan-roast and salt them as needed.

Olive Oil. Enzo Olive Oil is a family-owned and operated olive oil producer based out of California's San Joaquin Valley.

Panko Breadcrumbs are Japanese-style breadcrumbs that are lighter and airier because the individual pieces are shaped like flakes. They create a crisper texture in this recipe. You can find panko breadcrumbs in most regular grocery stores in the same aisle where regular Italian breadcrumbs are.

Salt. This is the Kosher salt I use for every day cooking.

Garlic. Use any form of garlic, but finely minced to the same size as the breadcrumbs will keep everything together.

All other fresh herbs and produce from either the Santa Monica Farmers' Market on Wednesday, or Whole Foods Market when I can't find what I need at the farmers' market.

How to Make Cauliflower Steaks with Golden Raisins and Pistachios

2. Warm white wine in a small saucier to just before boiling. Remove from heat and add raisins to plump for about 10-15 minutes while you prep the rest of the ingredients.

4. In same pan, add olive oil and allow to heat over medium. Add chopped garlic and cook until fragrant, but not brown. Add lightly chopped pistachios and stir until garlic becomes lightly golden brown. Remove to same bowl with breadcrumbs.

6. When cauliflower steaks are finished roasting, remove them to a large serving platter or individual serving plates. Spoon the Golden Raisins, Pistachios, and Breadcrumbs mixture over.

Pro-tip: Use a white wine for the recipe that you can also sip while cooking, and pair with the final dish. Wine suggestions below!

This version is already a bit of a departure from the more traditional renditions made with pine nuts and saffron, so you can vary it "backwards" by going back to those original ingredients! Here are some suggested substitutions:

As I always say, you don't need any special equipment to make Cauliflower Steaks with Golden Raisins and Pistachios. However, that doesn't mean there are a couple of gadgets and tools that might make the recipe a little easier than it already is.

You can store leftover Cauliflower Steak with Golden Raisins and Pistachios in an air-tight container in the refrigerator for one day. If you store the golden raisins, pistachios, and breadcrumbs separate from cauliflower, you can store for three days.

The ingredients can be frozen for up to a month if stored as above, cooked Cauliflower Steaks separate from the Golden Raisins, Pistachios, and Breadcrumbs.

What to Serve with Cauliflower Steaks with Golden Raisins and Pistachios

A thick slab of golden, caramelized cauliflower with sweet, nutty breadcrumbs is an entire meal imho, but if you like to have something fresh and green alongside, or a bit of protein, try these recipes and ideas:

Q: Can you make Cauliflower Steaks with Golden Raisins and Pistachios in advance?

A: Yes, you can make parts of tis recipe in advance and assemble just before serving. Sear the cauliflower steaks in advance, then store in an airtight container in the refrigerator. Make the golden raisins, pistachios, and breadcrumbs in advance and store in its own airtight container in the refrigerator up to a day in advance. Before serving, reheat the Cauliflower Steaks in a sauté pan with a light drizzle of oil over medium-low heat. Remove the cauliflower steaks from the pan and gently-reheat golden raisins and pistachios mixture. Assemble on platter or plates.

Q: Do you have to pre-boil cauliflower to make Cauliflower Steaks?

A: No, you do not have to pre-boil cauliflower to make Cauliflower Steaks! In fact, maintaining some level of "bite" in the cauliflower is better for the overall dish. Unless you actually want super soft cauliflower, in which case, you can still skip the pre-boiling part and simply drop the temperature to 350° and roast the cauliflower for 10-15 minutes longer. 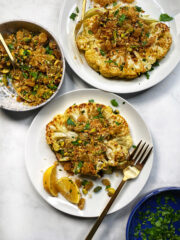 Wine Pairing for Cauliflower Steaks with Golden Raisins and Pistachios

You have a couple of directions you can follow for wine pairing with Cauliflower Steaks with Golden Raisins and Pistachios. Though cauliflower is the largest ingredient in the dish, it has a fairly neutral flavor profile that you can largely ignore in favor of the more uniquely flavored ingredients. Take the sweet lead of the golden raisins, or go down the flavor path of the pistachios.

For something fun, this wine is made from California-grown sangiovese, and fermented as whole clusters in a process called carbonic maceration so the wine has a slight natural fizz.

This post was created in partnership with California Grown to celebrate California Farmer and Farm Worker Month, which is every year in October. All opinions and recipe adaptations are my own. Your and our sponsors' support is what helps us live The Delicious Life so thank you!